A good friend of mine wanted to get one more batch of brewing in before he moves far far far away to Mississippi and becomes a father.  In a recent adventure, he stumbled upon a thai iced tea that was simply splendid.  He decided to brew an extract pale ale with the thai tea.  A pretty straight forward brew day, with only 1 hop addition of Galaxy at 60 min made this one of the easiest brew days I have had in a very long time.  The tea went directly into the secondary fermentation after we brewed a strong cup of the tea.  We brought it up to a camping trip and the keg went quickly. 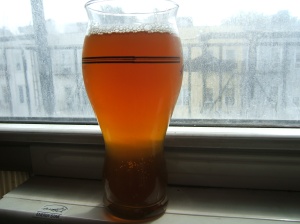 nose: a bunch of esters, but also a lot of tea and mint scents, kind of twangy

flavor: an earthy flavor that is a combination of the full flavored tea and the Galaxy hop bitterness, while dry, it is pleasant.

mouth feel: the tannin pushes the bitterness to a bit of astringency, but is still a very drinkable beer.  medium bodied and needs more carbonation.

overall: not bad for an extract brew. next time, I would like to dry out the beer, ease up on the tea, and hop with an english hop like Willamette. 6.0 / 10

Started out studying science, then put that to better use in brewing. Six years in, I'm continuing to explore and experience beers in new ways all the time. Check out what I'm brewing each week: new recipes and experiments and..... - CHRIS!